Reopening of the Grand Dame

Palm Beach -- The reopening ceremony of the resort was staged in the newly renovated lobby of the Grande Dame in the presence of the island’s Governor, Fredis Refunjol and his wife, the Minister of Tourism Mike de Meza, as well as other government ministers, members of Parliament, members of the media, the Aruba Growth Fund partners, Hilton International representatives, and many of the 414 resort team members.

Special guest of honor at the ceremony was Oscar Henriquez, who was among those who conceived the hotel in the first place.

As the island’s first Commissioner of Tourism in 1955, Henriquez reported to the Finance Minister Juancho Irausquin, his partner in the decision to introduce tourism to Aruba, in the form of a five star luxury hotel, designed by a world famous American architect Morris Lapidus.

At age 90, Henriquez was honored along with the Governor to officially cut the ribbon and declare the resort open, in time for the high season of 2017.

Local troubadour Etty Toppenberg entertained during the first part of the morning reception, then His Excellency the island’s Governor arrived and the official ceremony began with the singing of the island’s anthem by Roderick Franken.

Rene Kan representing the Aruba Growth Fund then greeted invitees paying homage in his speech to the island’s tourism pioneers, and to the architect of the hotel. He also thanked his business partners and investors, peppering his address with personal anecdotes. He reiterated his company’s unwavering long term commitment to the project and asked for the trust of hotel team members. “Let this past year be the first year that we have invested in your trust to build our reputation; I and the other owners and management will work each day to build a reputation of trust with each of you,” he declared.

David Keys and the Minister of Tourism also addressed guests delivering their respective perspectives about the resort renovations and about the future of tourism in Aruba.

Then the ribbon cutting ceremony took place with 6 key scissor yielding dignitaries, Oscar Henriquez, The Governor of Aruba, Rene Kan and Justus Martens, of the Aruba Growth Fund, the Minister of Tourism and David Keys, Hilton International, symbolically concluding the official part of the morning.

A cocktail party followed at the Sunset Grille Restaurant serving all specialties from the resort restaurants. Personal property tours, to see the newly renovated rooms, were accompanied by the hotel general manager Olivier Maumaire, and his team.

When the Aruba Growth Fund bought the hotel in July 15, 2015, it rebranded it as the Hilton Aruba Caribbean Resort & Casino, and during the last year and a half when through renovations ordering furniture and fixtures, and remodeling rooms, the corridors, common areas and dining outlets, the pool and beach areas, and landscaping, etc.

It is today the most updated resort on the island.

During the extensive makeover ownership wanted to celebrate the hotel’s fantastic history, so it held a contest for locals and tourists, and asked them to send in their best photos of the hotel from the 50’s and 60’s. The winning photos have been enlarged and are now hanging in the lobby, elevators, hallways, and the 355 rooms and suites.

In his vision for the resort, Rene Kan stated: “I’m very excited about the future of this hotel. I see a resort that’s the number one travel destination on Aruba. I see a place where our teammates come to work and leave each day with smiles on their faces. I see a hotel whose place in history cannot be forgotten but whose future is an integral part of our island home.”

He concluded his upbeat presentation on behalf of his partners Justus Martens and Milton Berlinski, and thanked everyone who put his or her trust in the ownership team, vowing to work together to create a beautiful experience for anyone who visits the resort and the fantastic island of Aruba. 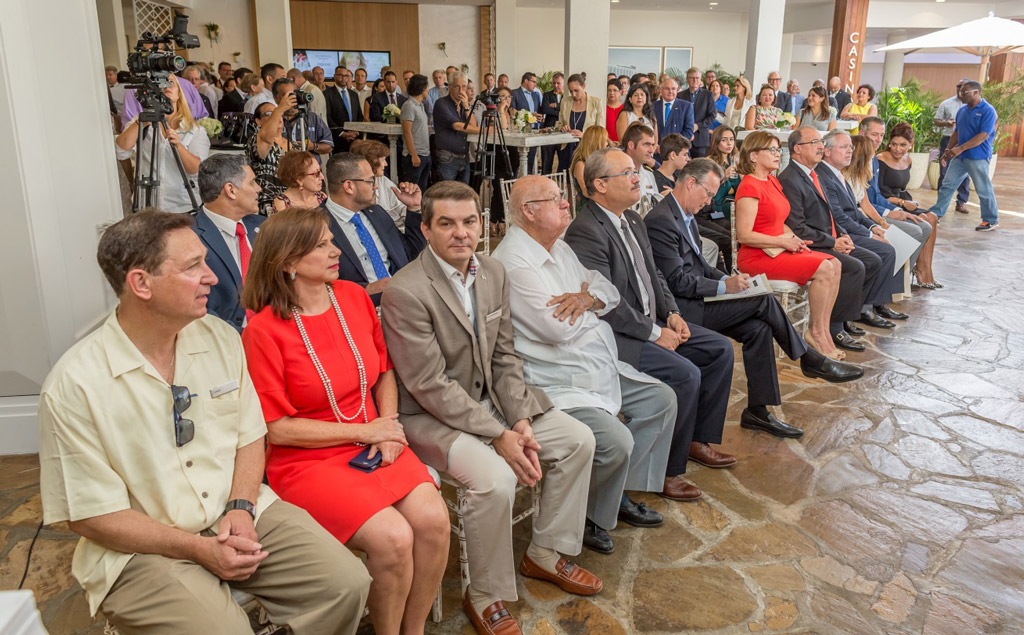